Equity markets tend to be an insightful gauge for investor and business leader confidence. So given that the average major equity market has more than doubled in value since early 2009, you would have thought that investors and the management of listed companies would be brimming with confidence. Unfortunately this is not the case. The current level of global equity market trading activity, mergers, acquisitions and initial public offerings have been subdued. We recently had the opportunity to discuss these trends with two CEOs who are at the coal face, Michael Corbat from Citigroup and Nicholas Moore from Macquarie.

Michael Corbat made the point that banking regulators are still obsessive about capital levels. In addition, there is considerable overlap amongst the various regulatory bodies and as a result the decision making process is increasingly being extended. Interestingly, leadership amongst key agencies like the Federal Reserve (FED), Federal Deposit Insurance Corporation (FDIC) and Office of the Comptroller of the Currency (OCC) is changing. It could be that the regulatory mindset may be about to transition from a “survival” bias to a “growth” focus. Mr Corbat also highlighted that Citigroup’s major clients have constantly been wrong footed by selling into major events like Brexit and the Trump presidency only to then buy back at significantly higher levels. He feels that customers will probably stay fully invested through the next market hurdle which will most likely be the FED’s asset sale program.

Nicholas Moore noted that, given asset market movements, Macquarie would normally be generating meaningful returns from its capital market facing divisions. These businesses typically generate an ROE of between 15% and 20%. However for the last 5 years they have averaged just 11%. Mr Moore indicated that market participants have significant levels of cash but the supply of deals is almost non-existent. He suggested it is possible that the decision makers governing deal supply are still obstructed by the scar tissue from the GFC. From an Australian investor’s perspective these comments from Mr Moore interested us. We have noticed that the average CEO tenure for Australia’s ten largest listed companies is now just 2.3 years. These ten companies combined are almost half of the capitalisation of the ASX200; could these “fresh eyes” lead Australia into a new investment
cycle? We believe that, as these incoming business leaders adapt to their new roles, confidence regarding trading conditions will most likely stabilise (refer to the NAB business survey chart below). When experience and confidence converge increased business activity tends to follow. 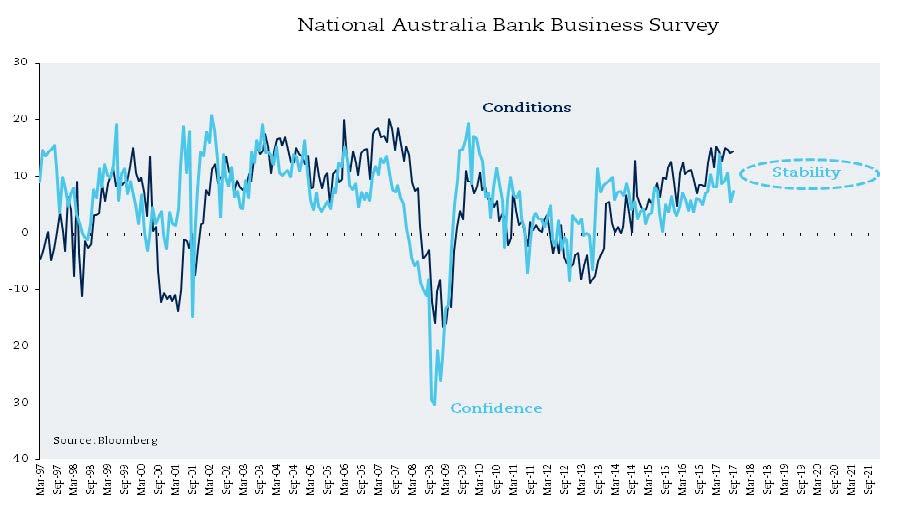 In our September quarterly commentary we mentioned that our equity market exposure had increased. We believe that the Australian economy has now developed a stable foundation for future growth. Non-mining capex for the June quarter hit a record high, non-passenger and SUV new vehicle sales have surpassed the prior peak reached during the mining boom and employment growth is finally back to pre-GFC levels. In addition the first time home buyer has finally re-emerged; their finance commitments in August were at the highest level since 2009. From our perspective the missing ingredient is investor confidence. We have been surprised that, according to the WBC/Melbourne Institute Survey, the share market is still seen as the worst place for savings and that level of belief is on par with March 2009. This lack of conviction in equity markets has seen a 5%pa decline in the average daily value of trade on the ASX since the GFC. We believe that sentiment towards the Australian equity market will improve. Interestingly, throughout the 20 years leading up to the GFC average daily trade value on the ASX consistently grew at 20%pa and 100 new listed companies emerged every year. Given we are finally seeing more sell-side analyst upgrades than downgrades, this could be the precursor to a greater level of equity market activity.

The Australian equity market has also been a global laggard; over the last 12 months the performance of Australian equities is ranked 65th out of 94 primary markets. The prospective dividend yield of the Australian market is the highest of the developed economies. This is despite expectations that next year Australia’s rate of unemployment and inflation will be about 20% lower than the global average. We are optimistic about investment opportunities in Australia and are confident that our portfolio is well positioned to generate growth in the year ahead.

The information contained on this website is produced by K2 Asset Management Limited (K2) ABN 95 085 445 094, AFS Licence No 244393, a wholly owned subsidiary of K2 Asset Management Holdings Limited. Its contents are current to the date of the publication only and whilst all care has been taken in its preparation, K2 accepts no liability for errors or omissions. The application of its contents to specific situations (including case studies and projections) will depend upon each particular circumstance. The contents of this website have been prepared without taking into account the objectives or circumstances of any particular individual or entity and is intended for general information only.

Any opinions contained within this website are the author’s own and should not be considered the opinion of K2 or as advice.

Any K2 funds referenced on this website are issued by K2 unless otherwise stated.  A product disclosure statement or information memorandum for the K2 funds referred to on this website can be obtained at www.k2am.com or by contacting K2.  You should consider the product disclosure statement before making a decision to acquire an interest in a fund.

K2 does not accept any responsibility and disclaims any liability whatsoever for loss caused to any party by reliance on the information on this website.  Please note that past performance is not a reliable indicator of future performance. Any advice and information contained on this website is general only and has been prepared without taking into account any particular circumstances and needs of any party. Before acting on any advice or information on this website you should assess and seek advice on whether it is appropriate for your needs, financial situation and investment objectives. Investment decisions should not be made upon the basis of its past performance or distribution rate, or any rating given by a ratings agency, since each of these can vary. In addition, ratings need to be understood in the context of the full report issued by the ratings agency themselves.

BACK TO NEWS & MEDIA